BEFORE & AFTER PHOENIX FEEDS 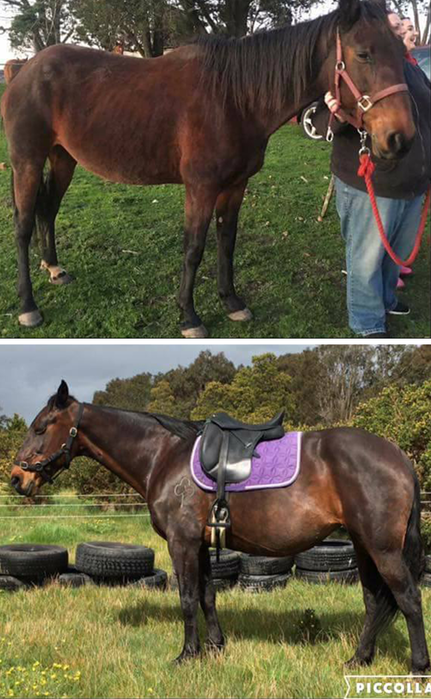 ​​This lovely Standardbred mare was a rescue. At the time of rescue this horse was thought to be 11 years old but on checking her brands she was actually 21. The first picture was taken a couple of months after her rescue. She was put on Equine Extra, Hi Fi, B+ and Whey.

2 weeks after the second picture was taken a coloured foal popped out much to everyone’s surprise. So the poor thing had been pregnant the whole time. 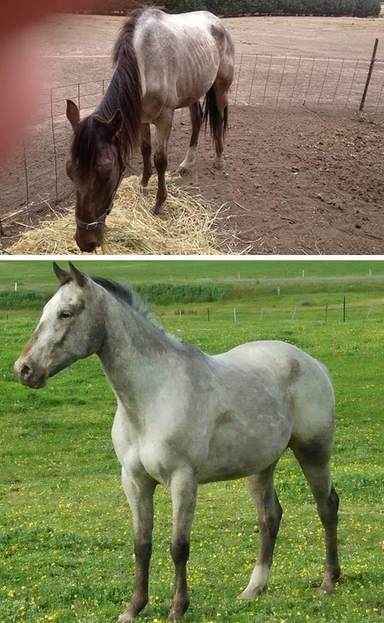 ​Nugget.
Top picture is the dramatic weight loss 48 hours after Nugget was bitten on the nose by a snake. To help with his recovery Sue put him on Hi Fi, Equine Extra, B+ and Kelp. Hi Fi to keep the fiber moving through his system. Equine extra to help put the condition back on. B+ as an overall health tonic, to boost his blood and help hydrate by encouraging him to drink. Kelp for the dietary iodine, to help with blood production and it dies contain vitamins and minerals that are readily absorbed.

He had to be monitored closely as his kidneys and liver had been affected . As he recovered he was transitioned to Sumo, Hi Fi and B+ and now lives on Manetane. 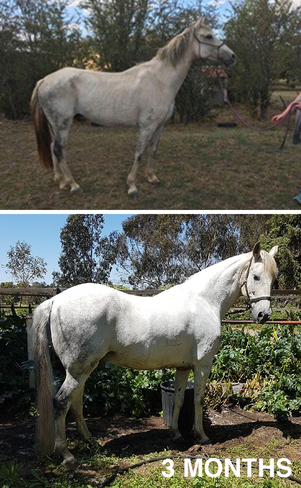 ​Monarque.
This is Sue’s personal horse that arrived after a long trip from Queensland. He was fed Hi Fi and Sumo and was one of the first test cases for FRF (Fast Recovery Fuel). Hi Fi to make sure he had bulk fiber in his system. Sumo for the essential amino acids, vitamins and minerals. FRF to help increase the muscle over his back end and through the barrel. FRF was also used to help him build condition up without altering his lovely temperament.

​A 2yo colt that had been fed adlib selenium. He was passing blood in his urine and we weren’t sure he was going to make it.
His recommended feed supplements to support his recovery were:
Parsley flakes - mild diuretic that was used to flush his system.
B+ - overall health tonic but also used to boost his iron content.
Whey - used to line his stomach to make him a bit more comfortable. Whey allows proteins to be absorbed through the stomach lining so it didn’t have to go through the liver and kidneys which will already be under a lot of strain.
This pony could still have long term issues but he is still enjoying life 4 years on.​ 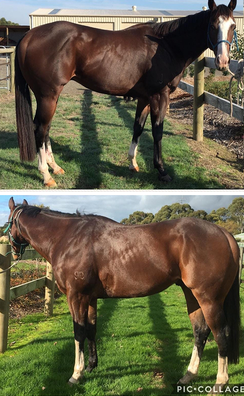 ​This filly had been particularly tucked up in training. She had a lovely temperament but seemed to have a nervous/over reactive disposition and was prone to being muscle sore/tying up. She was put onto Sumo and Hi Fi and Mag Ne Tude. Mag Ne Tude to help relax and take tension out of the muscles. As you can see in the second picture, which was taken 2 weeks after the first picture, you can see that the belly line has relaxed and she wasn’t holding as much tension in the muscles. She was better able to settle in he work.

​Mr Darcy arrived in poor condition and had some physical issues including damage in the shoulder area. His new owner Anne took a rounded approach to combatting his issues. As with any new horse she began a worming program, had his teeth attended to, feet trimmed, body work with a masseur started and consulted with Sue to outline a recuperative diet. He was put onto Manetane, Flex and pasture hay to start. Manetane was chosen for him because we didn’t want to put too much weight on too quickly as this could overwhelm his system and make it hard to treat his muscular issues Flex was given to assist in healing and repair of the muscles, give him some pain relief and improve mobility so he felt like moving around. Now he is recovered he is on Safe N Sound and Flex. 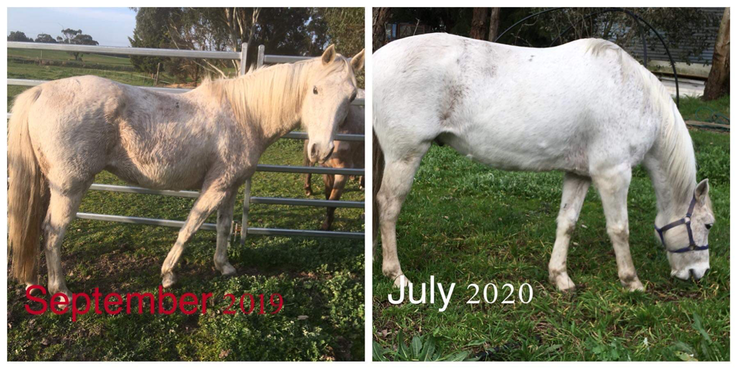 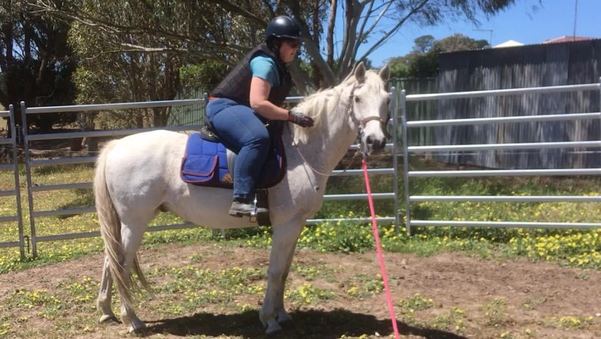